The elimination strategy better protects health, but not only
The G10 countries are far more affected by the pandemic in all aspects than the OECD countries that have opted for the Zero Covid strategy or similar, a representative benchmark of 82 million inhabitants of economically advanced democracies.

The number of deaths per million inhabitants was 44 times higher in the G10 countries, which means 1.1 million too many deaths by June 30, 2021. Economic performance, civil liberties and mobility were also worse.

The elimination strategy benefits the economy and accelerates recoveries
In 2020, the countries applying the Zero Covid strategy had almost returned to normal economic activity. Their GDP was down only slightly (-1.6%) compared to 2019. Meanwhile, the decline in GDP was greater (-5%) in G10 countries that had not eradicated the virus. 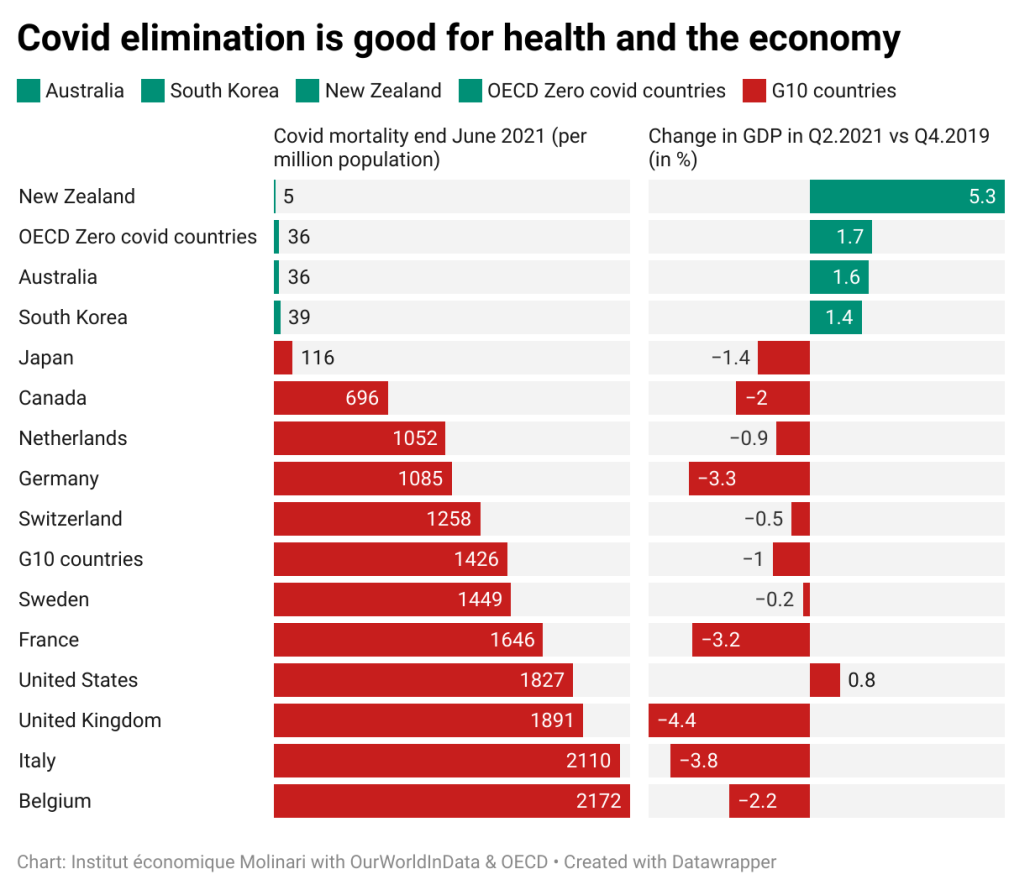 In the second quarter of 2021, none of the G10 countries had recovered their pre-crisis quarterly GDP levels, with the exception of the United States, while Australia, New Zealand and South Korea had done so. 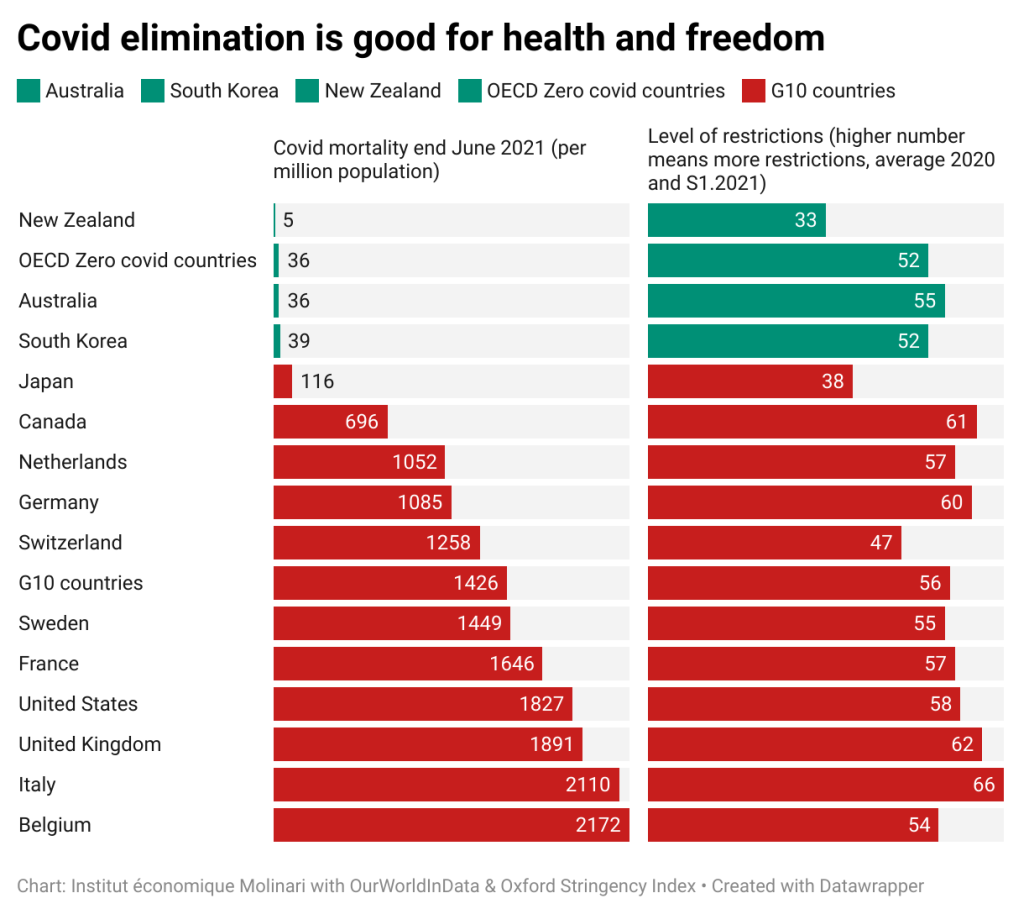 The OECD countries applying Zero Covid or similar strategies – Australia, South Korea and New Zealand – have had a restriction level four points lower than the G10 countries over the last year-and-a-half (52 versus 56 in the Stringency Index).

Conversely, the stop-and-go alternance in the G10 countries, a consequence of the virus mitigation strategy, leads to a periodic retrenchment of freedoms, reflecting measures to contain the pandemic. As long as the virus continues to spread, freedoms are going to be restricted. This entails a proliferation of moral problems, with isolation and a deterioration in the care of the elderly and of unprotected children exposed to the spread of the virus in schools, as well as tensions with people unwilling or unable to be vaccinated.

Google data show that traffic in “cafés, restaurants, hotels, non-food businesses and leisure and cultural activities in general” was down by 11% in 2020 and 2021. This was a much smaller decline than in the countries applying a mitigation strategy (down 22%). 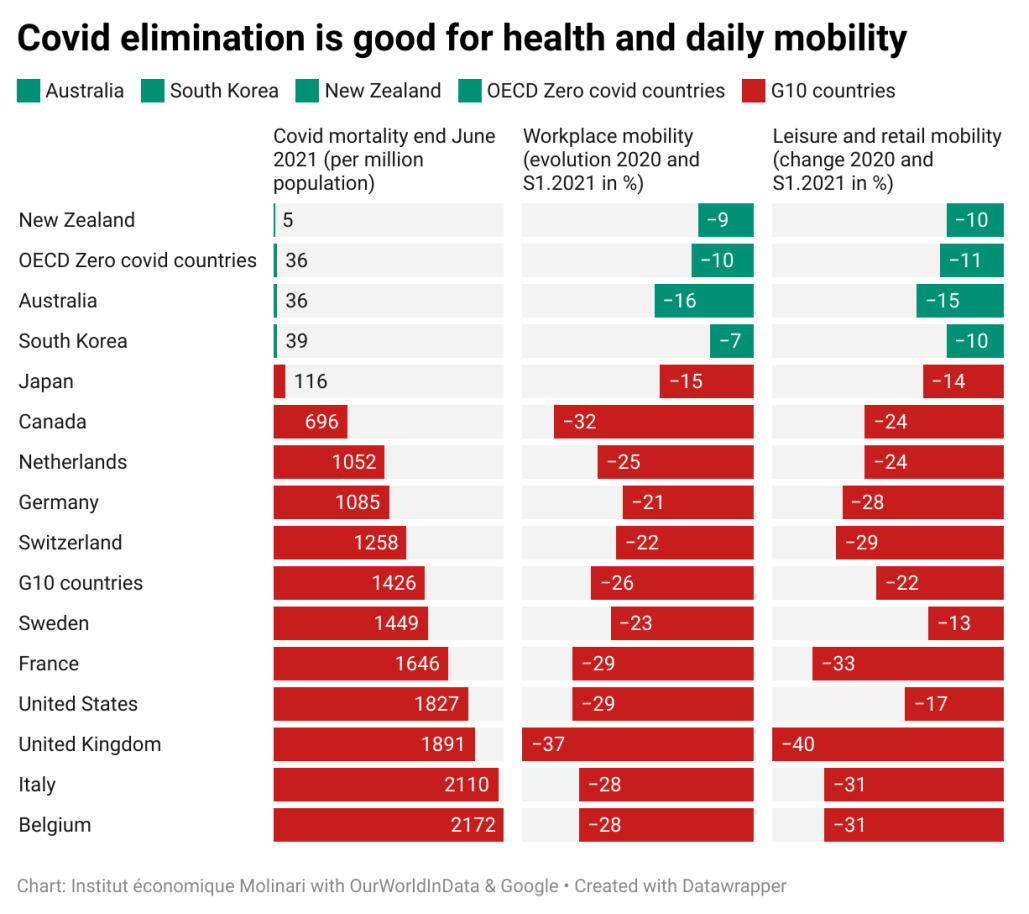 The elimination strategy helps control uncertainty
Cross-referencing of quarterly economic and health data confirms the superiority of the elimination strategy in terms of anticipation. People in those countries benefit from a level of visibility enabling them to project their societies and economies into the future.

In contrast, the course taken by the G10 countries has produced fluctuations, with the epidemic rebounding periodically. The mitigation strategy is causing them to seesaw, making it difficult to project into the future and thereby penalising societies and economies. This is especially problematic for businesses that depend on significant social interaction, like hotel, restaurant, culture, transport and recreation sectors. 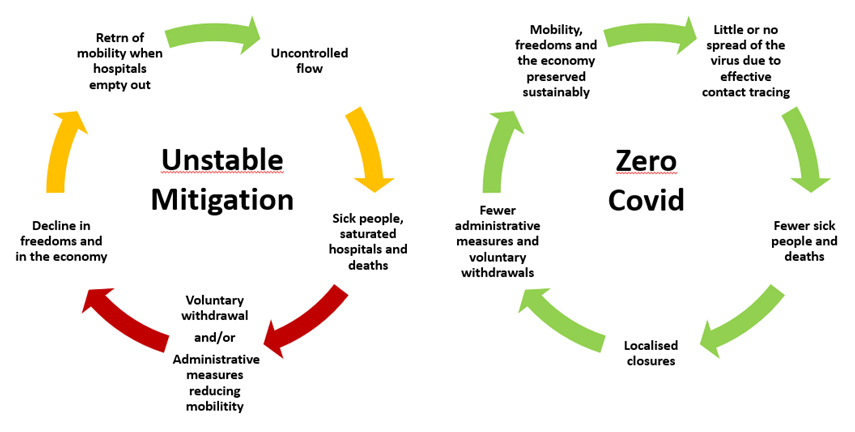 The contrast between islands confirms the superiority of elimination
The contrast is especially stark between Commonwealth islands applying the Zero Covid strategy (Australia, New Zealand) or the mitigation strategy (United Kingdom).

The economic decline of the United Kingdom was four times greater in 2020.

In 2020 and the first semester of 2021, restrictive measures were on average 20% more severe in the United Kingdom than in the islands of Oceania, according to the Stringency Index from Our World in Data.

Finally, the decline in mobility was three times greater in the U.K. in 2020 and the first semester of 2021, according to Google data, while deaths in the U.K. were 61 times higher.