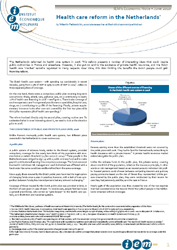 The Netherlands reformed its health care system in 2006. This reform presents a number of interesting ideas that could inspire public authorities in France and elsewhere. However, it also put an end to the existence of private health insurance, and the Dutch health care « market » remains regulated in many respects. Over time, this risks limiting the benefits the Dutch people could gain from the reform.

The Dutch health care system – with spending up considerably in recent decades, going from 7.3% of GDP in 1985 to 10% of GDP in 2004 – relies on three separate pillars of coverage.

On the one hand, there exists a compulsory public plan covering long-term care (chronic illness, elderly care, palliative care, etc.) contributing to nearly 27% of health care financing in 2008. There is also coverage of routine expenses (care from general practitioners or specialists, hospital care, drugs, etc.) contributing to 40.6% of the financing. Finally, private supplementary insurance looks after care not covered by the first two plans (this third pillar represents 4% of health care spending).

The reform involved directly only the second pillar, covering routine care. To understand what is most interesting about it, we need to look at the situation prior to 2006.