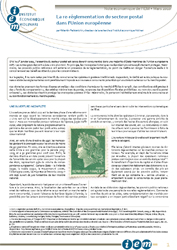 By January 1st, 2011, the entire postal sector is supposed to become competitive in a majority of European Union (EU) member countries, with the other countries following suit two years later. In principle, the historic monopolies should no longer be explicitly protected. Public authorities at the national level have nonetheless begun a process of re-regulation, to the point of endangering the real opening to competition and its expected benefits for consumers.

On paper, there will certainly be no prohibition on competing with the traditional postal operators. However, the reality is different, with new regulatory obstacles being imposed at the same time on potential new competitors that are seeking to get into the postal market.

These obstacles take diverse and varied forms: hard-to-meet conditions for market entry, compulsory contributions to “compensation funds,” out-of-reach minimum wages, or prohibitive tax measures. In the name of “universal postal service,” these obstacles aim to protect the postal monopolies of the past. They will inevitably harm competition and hinder the proper operation of the postal market.