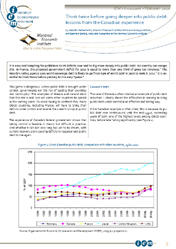 It is easy and tempting for politicians to let deficits soar and to dig more deeply into public debt. No country can escape this. In France, the proposed government deficit for 2010 is equal to more than one-third of gross tax revenues. The Moody’s rating agency says world sovereign debt is likely to go from 63% of world GDP in 2008 to 80% in 2010. It is essential to think twice before yielding to this easy « game. »

This game is dangerous. Unless public debt is brought under control, governments run the risk of leading their countries into bankruptcy. The examples of Greece and Iceland show that this risk is real. Nor will some other countries be spared in the coming years. To avoid having to confront this, many OECD countries, including France, will have to bring their deficits under control and reverse the current run-up in public debt.

The experience of Canada’s federal government shows that taking control is feasible in theory but difficult in practice. And whether it can last very long has yet to be shown, with current recovery plans causing deficits to reappear and public debt to rise again.