Paris, July 19, 2021 – Using data calculated by EY, the Institut économique Molinari is issuing its 12th annual study on the real social and fiscal pressure faced by the average wage earner in the European Union (EU).

2021 TAX AND SOCIAL CHARGE FREEDOM DAYS FOR THE AVERAGE WORKER 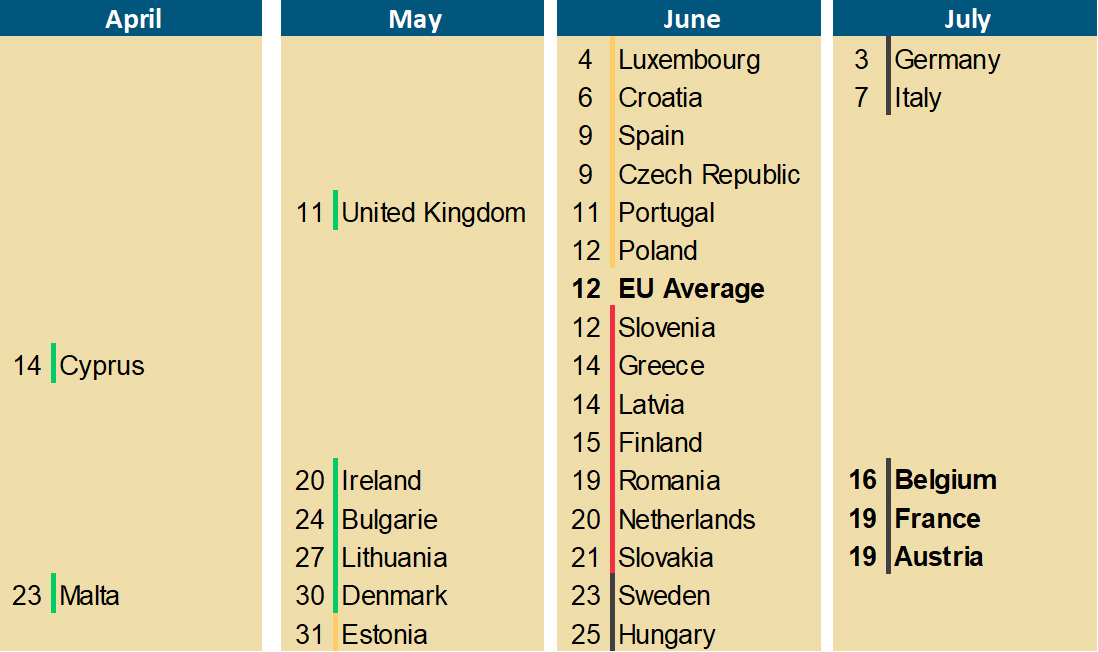 WHAT THE 2021 NUMBERS TELL US ABOUT EUROPE

As has been the case since 2012, the three European Union countries that top the list in taxation of the average worker are Austria, France and Belgium.

Before having €100 in real purchasing power, the average worker must cover €117 in social charges and taxes in Belgium, compared to €120 in France and €121 in Austria. The EU average is €85. 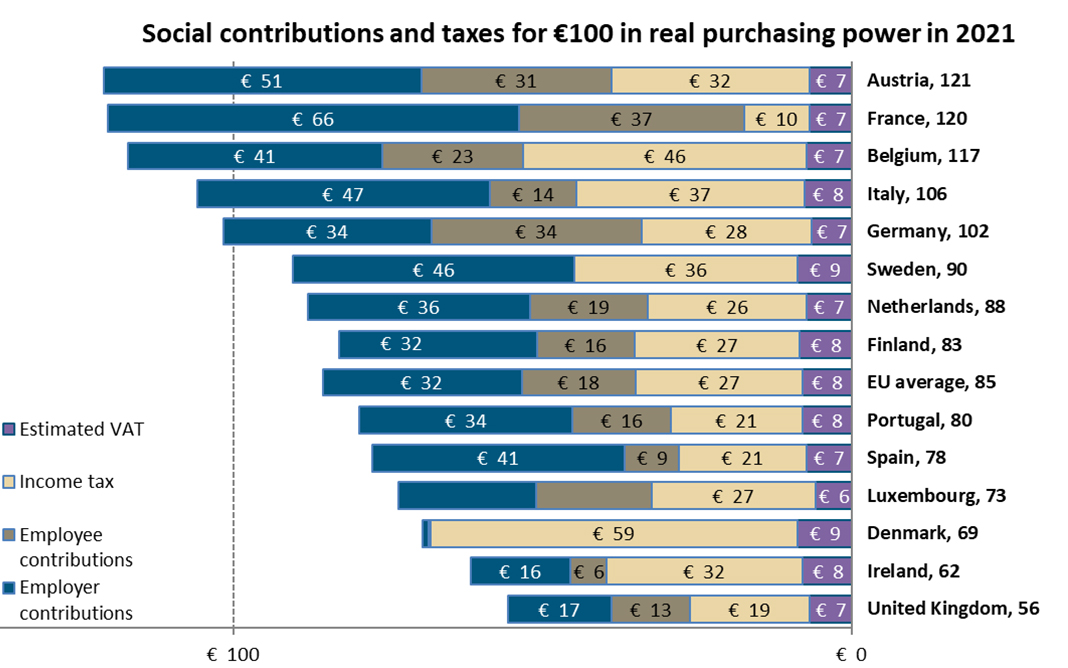 In 2021, Belgium remains third on the podium, but now France and Austria are tied for first place, with both countries marking tax freedom day on July 19.

In Belgium, tax and social charge freedom arrives on July 16, the same day as in 2020. The former number one in this ranking (from 2011 to 2015) moved into the number-two spot (in 2016 and 2017) thanks to its “tax shift” and then into third place starting in 2018. It remains there in 2021, with 53.95% social charge and tax pressure on the average worker, up slightly from last year (+0.19%) following a rise in the average wage, which caused a disproportionate increase in the income tax burden.

In Austria, tax and social charge freedom comes on July 19, one day later than in 2020. The burden on the average worker amounts to 54.76%, up slightly from last year (+0.30%) following a rise in the average wage, which caused a disproportionate increase in the income tax burden.

In five countries, more than half of work-related income is collected in taxes and social charges: Austria, France, Belgium, Italy and Germany. Average workers in those countries have no direct control over more than 50% of the fruits of their labour, with their influence over decision-making being indirect at best.

Over the last year, 14 countries in the 27-member EU have experienced an increase in compulsory levies. In 10 of these countries, changes in compulsory levies are leading to the loss of at least one day of purchasing power: Malta (four fewer days), Estonia and Ireland (three days), Finland (two days) and Austria, Cyprus, Spain, Luxembourg, Slovakia and Slovenia (one fewer day).

The improvement in Greece continues, with an eight-day gain in purchasing power this year:

On average, tax and social charge freedom comes on June 12 in the European Union, one day earlier than in 2020. All told, the various European governments have resisted the temptation to raise taxes in order to cover the deficits caused by the pandemic.

WHAT THE 2021 NUMBERS TELL US ABOUT FRANCE

Higher social charges and taxes do not mean greater well-being 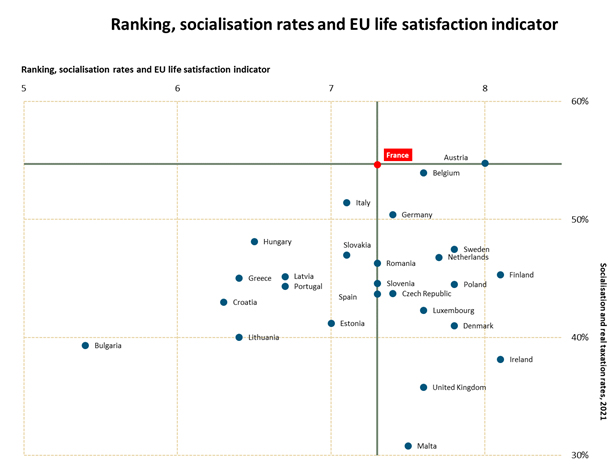 “Despite the changes in social charges and income tax over the last few years, average workers in French remain the most heavily taxed in Europe, along with the Austrians.

“Over the years, we have become the tax and social charge champions. The result has been lower growth in France than in the rest of the European Union, and structural unemployment remains abnormally high. Our public deficits fall at a slower pace than elsewhere during upturns, and debt rises more during downturns.

“In the absence of significant growth, measures intended to restore middle-class purchasing power often look too much like to-and-fro games. The year 2019 was marked by a decrease in social charges, but unfortunately the effect was offset by an increase in the generalised social contribution. The year 2020 saw a decrease in income tax, with the lowest bracket reduced to 11% from 14%, but with the threshold for entering this bracket lowered to 30%, the financial gain for the average worker was reduced.

“There is a need to diversify the financing of pensions, which relies almost exclusively on compulsory levies that hinder competitiveness and employment. Among our neighbours, a significant portion of pension costs is financed by capitalisation, making pension financing less costly for the economy and providing better value for money for pensioners and for the working population.

“There is also the challenge of reducing forms of taxation that penalise job creation and wage growth. A significant portion of outsized French production taxes and of corporate taxes are borne by workers. These taxes hold back wage growth in France and encourage offshoring. These are societal errors.”

Cécile Philippe, president of the Institut économique Molinari and co-author

“The absence of a direct link between the quality of public services and the tax and social charge burden makes one of the reasons for France’s economic decline more visible. With the wealth we have accumulated over the decades, we are now confusing causes and effects. All too often, we think wealth simply has to be thrown at a problem for the problem to be resolved, whereas money is the result of a wise investment that has produced tangible results. Today we hold the mistaken belief that levies and deficits merely have to be aligned to produce the results we expect. We have forgotten that it takes a strategy and a tactical approach to achieve effective deployment.

“Investing wisely requires having a vision and checking the actual returns. But we have lost the habit of checking to see whether our taxes and our deficits are legitimate. The time has come to convert our expenditures into investments, whether for pensions, health care, education or housing.” 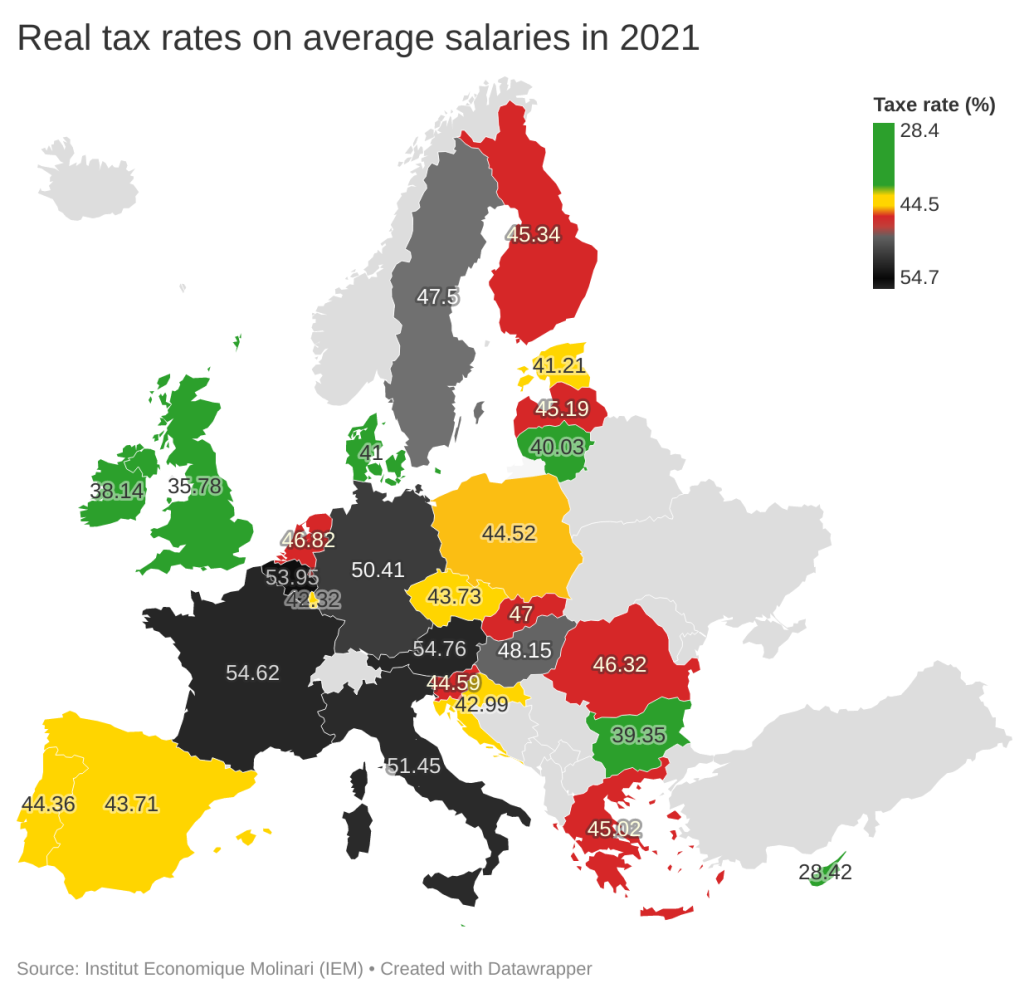 Tax and social charge Freedom Day is the date when the average employee stops, in theory, paying social charges and taxes and can use the fruit of her labour as she pleases.

The particularity of this indicator of economic freedom is that it puts the situation of average EU wage earners in tangible form by bringing together each country’s taxation of labour (social charges and income tax) and of consumption (VAT). Calculations of employer and employee social charges and of income taxes are done by EY for each of the 28 EU countries.