Paris, June 10, 2020 – The Institut économique Molinari has released a new study on the social and fiscal contribution of the CAC 40 companies. It presents a new way of quantifying the wealth created by these companies, outlining the sharing of this wealth between employees, governments and shareholders.

It shows that the CAC 40 companies created €389 billion in wealth for the French and global community in 2019.

This social and fiscal contribution: 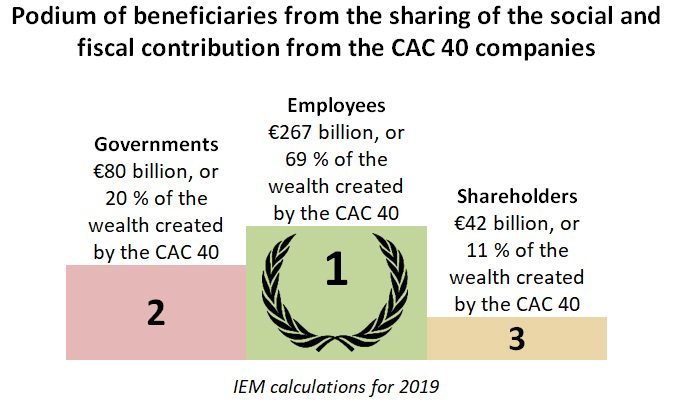 If we focus solely on the division of distributed earnings, amounting to €97 billion, we see that:

The coronavirus crisis is likely to make it more obvious that wealth creation by large companies is fundamental. It is vital for the employees and governments that benefit from it directly as well as for the entire ecosystem of subcontractors and partners that benefit indirectly.

The study shows that governments were the second greatest beneficiaries of the CAC 40 companies’ growth, with €31 billion in production taxes, €37 billion in corporate income tax and €12 in taxes on dividends.

In recent years, the government has benefited from the increased yield on production taxes, up 27% for the CAC 40 since 2016, our estimates suggest. Revenues from production taxes in France are double the European average, according to Eurostat. These taxes, levied ahead of any corporate profit, amounted to 3.2% of French GDP in 2018, compared an average of 1.6% of GDP in the European Union and 0.4% in Germany. Though little known to the general public, they raise about €75 billion a year, far more than the corporate income tax, which brought in €33.5 billion in 2019.

Furthermore, the government has gained from the increased yield on the corporate income tax, up 34% for the CAC 40 companies since 2016, according to our calculations. The French tax rate is higher than average, with a ceiling of 31%, topped up by the 3.3% social contribution on income, bringing the maximum tax rate to 32%, the highest among the 35 OECD countries.

Finally, the government has benefited from taxation of dividends, which constitutes a second layer of taxation on distributed profits.

The study shows that joint or individual shareholders come in behind employees and governments. They rank third among beneficiaries, with €42 billion in after-tax dividends. Far from grabbing most of the profits, they were part of a collective wealth creation chain that amounted last year to €389 billion in France and abroad.

In the last few weeks, the French authorities have sought to influence dividend distributions, quite apart from taxation, with the aim of lowering them. This political rallying cry, presented as a moral choice, was advanced without any economic impact studies. It will have negative economic and financial effects, with reduced capital movement and lower public revenues.

The study states that the government is entitled to request lower dividends at companies in which it holds shares through the Agence des participations de l’État (Government Shareholding Agency):

The study notes that government interventionism in dividend distributions by private companies is neither legitimate nor desirable:

While there have been calls for higher taxes to offset the fragile state of public finances, the study shows that French companies continue to bear above-average taxation. This is a handicap affecting society as a whole, whether in times of growth or of crisis. Seeking to resolve the imbalances in French public finances by questioning tax cuts or raise taxes would be counterproductive.

The tax on dividends remains substantial despite the adjustments made with creation of the 30% flat tax. It slows reinvestment in the economy, and increasing it would be self-defeating. This would lead economic players to relocate their assets or to redirect their investments toward foreign companies that benefit from more competitive tax environments.

The corporate income tax is expected to go back down to 25% in 2022, or 25.8% with the social contribution on income factored in. This trajectory, bringing France closer to the OECD average, is fundamental. Deferring it would hurt the economic development of large French companies and the entire ecosystem they support.

France urgently needs to reduce or even dismantle its production taxes, which are calculated using tax bases disconnected from earnings (production facilities, payroll, revenues, etc.). Contrary to talk suggesting an interest in relocating industrial jobs to France, these taxes end up subsidising imports and offshoring. They create handicaps in normal times and economic damage in a time of crisis.

Taxing French companies more than the average is a choice that penalises all of society. Companies have to pass along higher taxes to consumers, employees or shareholders. For example, this causes companies to pass along taxes to their customers, eroding the quality/price ratio so as to maintain market share. It holds back wages in France and boosts incentives to create jobs outside France. It drives some companies to pay shareholders less, at the risk of encouraging them to look elsewhere. Taxes are piled on top of taxes, with each euro of profit distributed as dividends subject to the tax on dividends, the corporate income tax based on profits and production taxes based on numbers that have no connection with earnings.

THE REPORT IS AVAILABLE (IN FRENCH) AT: https://www.institutmolinari.org/wp-content/uploads/2020/06/entreprises-cac40-2020_fr.pdf

”In a time of crisis, common sense would have suggested refraining from putting pressure on large companies to reduce their dividends. Urging companies to withhold dividends and to retain capital that they may not need ends up penalising other companies that could have made better use of this resource. A large portion of dividends is reinvested. When governments curb distribution of these dividends, they are curbing their redistribution and their reinvestment in other companies.

“In France, the government spends too much time lecturing companies and shareholders and too little time eliminating the constraints that hinder economic development. It has a propensity to organise confusion, interfering in the work of other stakeholders and failing to address the priorities that are within its purview. By meddling in dividend distribution, it is sending a counterproductive message of distrust. The government might have been expected to direct its energy toward lowering production taxes, which are asphyxiating the French economy and end up being an unemployment creation machine, rather than telling shareholders what to do.”