Paris, May 14, 2019 – The Institut économique Molinari has released a new study on the social and fiscal contribution of the CAC 40 companies. It presents a new way of quantifying the wealth created by these companies, outlining the sharing of this wealth between employees, governments and shareholders.

It shows that the CAC 40 companies created €373 billion in wealth for the French and global community in 2018. Employees are the greatest beneficiaries, with €265 billion in wealth, followed by French and foreign governments (€72 billion) and shareholders (€36 billion).

If we focus only on the share of earnings, governments appear to be the top beneficiaries with €43 billion, followed by non-government, non-employee shareholders (€35 billion) and then by employees (€6 billion). 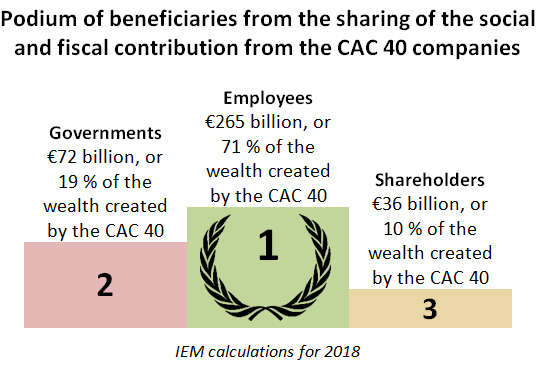 Employees are the top beneficiaries of this wealth creation, with €260 billion in staff expenditures (wages, bonuses, compulsory and optional social protection, etc.), €4 billion in employee savings and share ownership and €1 billion in dividends.

Shareholders follow behind employees and governments. They are the third-ranking beneficiaries, with €36 billion in dividends (net of taxes and dividends paid to employees). Far from grabbing most of the profits, they take part in a collective wealth creation chain accounting for €373 billion in France and abroad.

GOVERNMENTS AND EMPLOYEES ARE THE TOP WINNERS FROM ECONOMIC DYNAMICS

In comparison to the previous edition, covering 2016, the CAC’s fiscal and social contribution was up 10% to €373 billion.

This dynamic results from much faster growth in corporate tax revenues (+20%) and personnel costs (+11%), while dividends net of corporate tax stagnated.

STATES ARE THE FIRST BENEFICIARIES OF THE SHARE OF EARNINGS

If we focus only on the profits before taxes, governments appear to be the top beneficiaries, followed by non-government, non-employee shareholders and then by employees. 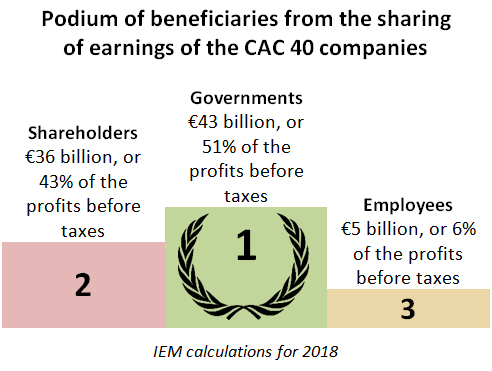 Shareholders are the second greatest beneficiaries from the sharing of earnings, with €36 billion in dividends after deduction of taxes and dividends paid to employees and governments.

Employees are the third greatest beneficiaries from the sharing of earnings, with €5 billion: €4 billion in group savings and share ownership and €1 billion in net dividends.

THE FRENCH GOVERNMENT COMES OUT WELL AHEAD

The French government stands out among the governments benefiting from the development of CAC 40 companies.

On the one hand, it pulls in revenues from production taxes that are double the European Union average. These taxes, levied even before companies turn a profit, account for 3.2% of GDP in France, compared to an average of 1.6% in the EU and 0.4% of GDP in Germany. Though little known to the general public, they are a tax revenue source double the size of the corporate tax, at €72 billion, compared to €36 billion, net of tax credits.

In addition, it benefits from a substantial corporate tax. The ceiling rate is 33.33%, to which should be added the 3.3% social contribution on profits. This produces a maximum tax rate of 34.43%, the highest among the 35 OECD countries. This rate is set to come down to 25% in 2022, or 25.83% taking account of the social contribution on profits, moving closer to the OECD average.

Finally, the French government benefits from taxes on dividends distributed to natural and legal persons holding shares in CAC 40 companies, with a tax that remains high despite the adjustments that have occurred with the creation of the Prélèvement forfaitaire unique (PFU), or single flat-rate levy.

“The IEM study shows that businesses play a part in a collective wealth creation chain that benefits employees first and foremost, with €265 billion in 2018, then governments with €72 billion and finally shareholders with €36 billion.”

“Focusing on profits alone is not sufficient to grasp the scope of companies’ social and fiscal contribution. The bias that sometimes leads to shareholders being presented as enemies of employees has the flaw of obscuring an inescapable reality: employees, governments and shareholders all have an interest in the development of companies and in their earnings.”

“These original numbers from the Institut économique Molinari show how the big companies benefit employees and governments above all and shareholders to a lesser extent.”

“In 2018, they distributed nine times more wealth to employees and governments as to the owners of capital. Even with a focus on profits alone, shareholders end up behind governments.”

“These orders of magnitude should take the heat out of the debate on large companies and the sharing of their value creation.”

THE REPORT IS AVAILABLE IN FRENCH