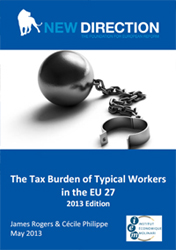 Objective of the Study

The purpose of this study is to compare the tax and social burdens of salaried employees in the 27 Member States of the European Union and, in doing so, determine a « tax liberation day » for individuals who are working in those countries.

In addition, the study tracks year-to-year trends in the taxation of labour.

Numerous studies rank political systems by various measures of « economic freedom. » While valuable to economists, the aggregate data in these studies fails to shed light on the working individual’s role in financing their state and social security.

This study aims to create an « apples to apples » comparison of « real tax rates, » with data that reflect the reality experienced by real, working people in the European Union. Further, it serves as a guide to the true cost of hiring employees in each state.

Key findings of the study include:

– Belgium retains its ranking as the country that taxes labour at the highest rate in the European Union; an employer in Brussels spends 2.52€ to put 1€ into a typical worker’s pocket – and that worker’s tax liberation day is August 8. Belgium has held its position since 2011 when Hungary, previously the most severe tax collector, implemented a flat tax scheme.

– 43.4% of all payroll taxes collected in the EU countries – employer contributions to social security paid on top of gross salaries – are largely invisible to employees.

– Retired, disabled, disenfranchised or simply too young, more than half (54.5%) of citizens are not in the labour force. Tax-wise, working people carry most of the weight, which grows heavier as populations grow even older. Since 2010, the proportion of Europeans outside the labour force has grown by 0.2%.

– Flat tax policies have offered considerable tax relief to workers – notably in Hungary, where a new 16% rate has pushed that country’s tax liberation day forward by 22 days in just two years. However, total taxes remain higher in « flat tax » countries (46.8%) than in « progressive » systems (44.6%) – a gap that has widened since 2010.

“Taxes are still rising, and both businesses and workers are paying too much, so it’s no surprise economies across the EU are still in the doldrums,” says Tom Miers, of New Direction

“EU states continue to spend too much and too often austerity measures mean higher taxes. It is time to rethink how one makes an economy grow: through higher taxes or more incentives to produce?” says Cécile Philippe, director of IEM.

Tax Liberation Day is the calendar day on which a worker theoretically stops working to pay taxes to the state and begins to keep his/her earnings. The data in the calendar reflect the reality experienced by real, working people in the European Union and the true cost of hiring employees in each state.

“Many believe falsely that their payslips show all of the taxes withheld from their salaries. In fact, nearly half of what Europe’s governments collect – social security contributions paid by employers on top of salaries – is invisible to workers,” explained James Rogers, one of the authors of the study.

The study, written by James Rogers and Cécile Philippe of Institut économique Molinari (Paris), analysed annual salary figures for typical workers from Eurostat and the OECD. Payroll tax calculations were made by Ernst & Young.