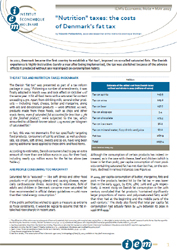 In 2011, Denmark became the first country to establish a « fat tax », imposed on so-called saturated fats. The Danish experience is highly instructive: barely a year after being implemented, the tax was abolished because of the adverse effects it produced without any real impact on consumption habits.

The fat tax and nutrition taxes in Denmark

The Danish « fat tax » was presented as part of a tax reform package in 2009. Following a number of amendments, it was finally adopted in March 2011 and took effect on October 1 of the same year. It hit all food items with a saturated fat content exceeding 2.3%. Apart from drinking milk, several other products — including meat, cheese, butter and margarine, along with oils and delicatessen products — were affected. As well, products made from these foods, such as chips and other snack items, even if saturated fat accounted for less than 2.3% of the finished product, were subjected to the tax, which amounted to 16 Danish kroner (about 2.15 euros) per kilogram of saturated fat.

In fact, this was not Denmark’s first tax specifically targeting food products. Consumers of spirits and beer, as well as chocolate, ice cream, soft drinks, sweets and so on, have long been paying additional taxes applied to these drink and food items.

According to estimates, Danish consumers had to pay an extra amount of more than one billion euros in 2012 for their food, including nearly 170 million euros for the fat tax alone.