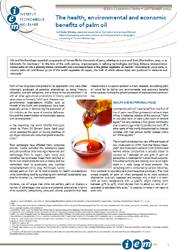 Oils and fats have been essential components of human life for thousands of years, whether as a source of food, illumination, soap, or as lubricants for machinery. At the turn of the 20th century, improvements in refining technologies and long distance transportation turned palm oil into a globally traded commodity and a dominant force in the global vegetable oil market. According to USDA data, in 2011/12 palm oil contributed 32.7% of the world vegetable oil supply, the bulk of which (above 85%) was produced in Malaysia and Indonesia.

Palm oil has long been denigrated by its opponents (who were often historically producers of potential alternatives) as being « impure, unhealthy, outright dangerous, and a threat to the environment. » As with all other agricultural productions in history, palm oil production takes place on formerly « wild » land. Western non-governmental organizations (NGOs) such as Friends of the Earth and Greenpeace have been especially active in denouncing the expansion of this industry as the cause of massive deforestation and the extermination of charismatic species such as orangutans.

Their campaigns have affected many corporate policies. Nestlé excluded the Indonesian paper and palm producer Sinar Mas Agro Resources and Technology from its supply chain. Since 2010 Carrefour has purchased Green Palm certified oil for its own brand products sold in France and has committed itself to purchasing only Certified Sustainable Palm Oil by 2015. For its part, Casino banned palm oil from all its food products for health considerations while committing itself to purchasing only certified « sustainable » supplies for its other (i.e., non-food) products.

However, we will argue that while not perfect, palm oil displays a number of advantages over actual and potential alternatives in terms of its versatility, productivity, price and volume availability that does indeed make it a superior product in many respects. Boycotting palm oil would fail to deliver any environmental and economic benefits while severely hurting the growth prospect of impoverished communities.