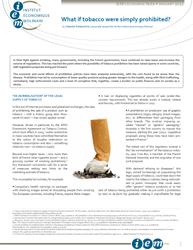 In their fight against smoking, many governments, including the French government, have continued to raise taxes and increase the volume of regulations. This has reached the point where the possibility of tobacco prohibition has been raised openly in some countries, with legislative proposals being put forward.

The economic and social effects of prohibition policies have been analysed extensively, with the cure found to be worse than the disease. Prohibition has led to consumption of lower-quality products posing greater dangers to the health, along with illicit trafficking, contraband, high enforcement costs and a level of corruption that, together, create a burden on public finances and on society as a whole.