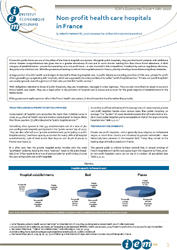 Private for-profit clinics are one of the pillars of the French hospital care system. Alongside public hospitals, they provide French patients with additional choice. Greater competitiveness has given rise to a greater abundance of care and to much shorter waiting lists than those found elsewhere. A third category of establishments – private but operating on a non-profit basis – is also involved in this competition. Penalised by various regulatory obstacles, they play only a limited role. With the government seeking to reform the hospital system in France, priority should go toward removing these obstacles.

A large portion of public health care budgets is devoted to financing hospital care. In public debate surrounding provision of this care, private for-profit clinics generally go up against public hospitals, which are supposedly the sole providers of so-called “public hospital service.” Private non-profit hospitals are usually ignored, even though most of them also provide this “public service.”

With obligations identical to those of public hospitals, they are nonetheless managed in a less rigid way. They are also more likely to adapt to society’s future health care needs. They are a major pillar in the provision of hospital care in Alsace and account for the great majority of establishments in the Netherlands. If the government really wants to reform the French health care system, it should examine the alternative they provide.