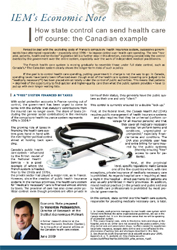 Forced to deal with the exploding costs of France’s compulsory health insurance system, successive governments have attempted repeatedly – especially since 1996 – to impose control over health care spending. The new “hospital, patients, health and territories” legislative bill is a further step in this direction, extending considerably the control exerted by the government over the entire system, especially over the work of independent medical practitioners.

The French health care system is moving gradually to resemble those under full state control, such as Canada’s. The Canadian system clearly shows the longer-term risks of such a policy.

If the goal is to control health care spending, putting government in charge is not the way to go: in Canada, spending levels have barely been influenced even though most of the health care system (covering care judged to be “medically necessary”) has been placed almost totally under the control of public authorities. This means that patients – deprived of the opportunity to find quicker and higher-quality care than what the public system provides – have to put up with ever longer waiting lists.