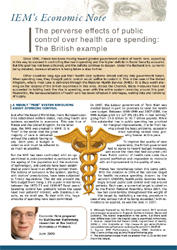 Since 1996, France has been moving toward greater government control of health care, expecting in this way to succeed in controlling the rise in spending and the higher deficits in Social Security accounts. But this goal has not been achieved, and the deficits continue to deepen. Under the Bachelot law, currently being debated, bureaucratisation is being taken a step further.

Other countries long ago put their health care systems almost entirely into government hands. When spending rose, they thought public control would suffice to contain it. This is the case of the United Kingdom, where most care is delivered through the National Health Service (NHS). It is thus worth drawing on the lessons of the British experience in this area. Across the Channel, these measures have not succeeded in holding back the rise in spending, even with the entire system revolving around this goal. Meanwhile, the bureaucratisation of health care has been reflected in shortages, waiting lists and rationing of supply.