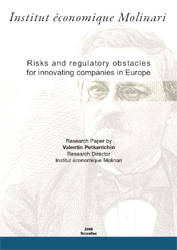 This Research Paper aims to draw attention to the risky side of innovation and the negative effects it faces from certain public policies that were instituted for various reasons. Many regulations penalise innovating companies directly or indirectly despite the emphasis placed on innovation by community authorities since the Lisbon strategy of 2000.

The first part of the Paper is devoted to the fact that companies face a number of risks. There first exists a technological risk: despite considerable resources, innovating companies are never protected against failure. For example, even with many millions of euros invested over several years, new molecules may not lead to marketable medicines despite the efforts of drug firms to develop them. Next there is a commercial risk: new products, regardless of the promise they hold out, may not present added value for consumers. That makes them a source of outright losses for innovating companies that then cannot recuperate their R&D investments. These risks together explain why innovating companies’ profits on the market may naturally appear higher from a simple bookkeeping standpoint.

The second section of the Paper is devoted to the regulatory obstacles created in Europe, preventing free access by new products to the market on the pretext of consumer protection. Under pressure from the “precautionary principle” and what may be called the “zero risk” culture, administrative procedures for authorisation have been instituted in many areas. The obstacles to market access for pharmaceutical products and chemicals (with the REACH directive in Europe) are analysed. By reversing the burden of the proof as to whether a new product is without potential risks, these procedures end up being hostile to innovation, putting a much heavier load on the shoulders of innovating companies than what caution and respect for property rights would dictate in a market economy.

In the third and final part, the Paper analyses two other public policies that are unfavourable to innovation and that apply once new products have reached the market.

This is true of policies to contain healthcare spending, applied to pharmaceutical products in various forms in European countries (price controls, bureaucratisation of drug use, quantitative restrictions, etc.). The prospect of seeing the prices of future products submitted to increasingly tight downward controls and of having to negotiate prices with administrations that have financial cost containment as their priority is a major added risk for innovating companies in their sector. This contributes inevitably to increasing the uncertainty that surrounds innovation. Interest in pursuing innovation is necessarily diminished by it.

The second case studied in the Paper is that of antitrust policy in Europe. With their innovative character and greater consumer satisfaction, innovating companies are acclaimed by consumers and can thereby achieve a “dominant position.” However, regardless of the origin of a company’s market “dominance” – which can arise naturally from efforts to innovate – anti-trust policy is unfavourable to innovation by its mere presence and the sanctions it imposes on such companies. The examples presented involve sectors as varied as the computer, software and Internet field (Microsoft, Intel and Google, among others), telecommunications and, again, pharmaceutical products.

The Paper concludes that it is all the more important to analyse the effects of these public policies on R&D and innovation because they are not directly perceptible and it may take many years or even decades for their negative impacts to show up fully. European economies and standards of living have been built on yesterday’s innovating efforts. We should be careful not to reverse this trend by penalising present and future innovation!