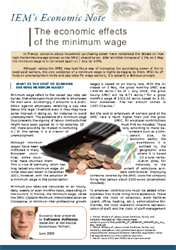 In France, concerns about household purchasing power have revitalised the debate on how high the minimum wage (known as the SMIC) should be set. After an initial increase of 2.3% on 1 May, the minimum wage is to be raised again on 1 July by 0.9%.

Although raising the SMIC may look like a way of increasing the purchasing power of the lowest-paid workers, the very existence of a minimum wage is highly damaging to them. With its effects on unemployment levels and pay rates for wage earners, it is actually a dubious concept.