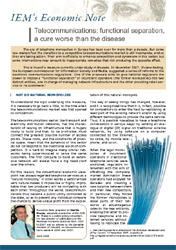 The era of telephone monopolies in Europe has been over for more than a decade. But some law-makers feel the transition to a competitive telecommunications market is still incomplete, and so they are taking action. Their aim is officially to enhance competition and dynamism in this sector, but some interventions may amount to inappropriate remedies that risk producing the opposite effect.

This is true of a measure currently under study in Brussels. In November 2007, Viviane Reding, the European commissioner for Information Society and Media, suggested a series of reforms to the electronic communications regulations. One of the proposals aims to give national regulators the power to impose a “functional separation” of incumbent operators (the former monopolies) into two distinct entities, one in charge of managing network infrastructure and the other providing retail service to its customers.