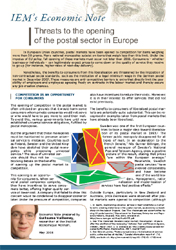 In European Union countries, postal markets have been opened to competition for items weighing more than 50 grams. Many national monopolies subsist on items that weigh less than this limit. Under the impetus of EU policy, full opening of these markets must occur not later than 2011. Consumers – whether business or individuals – can legitimately expect prices to come down or the quality of service they receive to go up (for instance, higher rates of next-day delivery).

Nonetheless, the benefits to consumers from this liberalisation are threatened by the imposition of non-contractual social standards, such as the institution of a legal minimum wage in the German postal market in December 2007. These measures are anti-competitive barriers to entry that directly limit the possibility of employers and employees agreeing freely on contracts in the labour market and thereby secure any job creation chances.