Paris, 16 July 2022 – Using data calculated by EY, the Institut économique Molinari is issuing its 13th annual study on the real social and fiscal pressures faced by the average wage earner in the European Union (EU).

This ranking has the distinct feature of providing figures for the current year on the social and fiscal pressure faced by the average worker, applying a solid, uniform methodology across all 27 EU member countries. It provides a firm understanding of the real impact of taxes and social contributions and the changes they are undergoing. 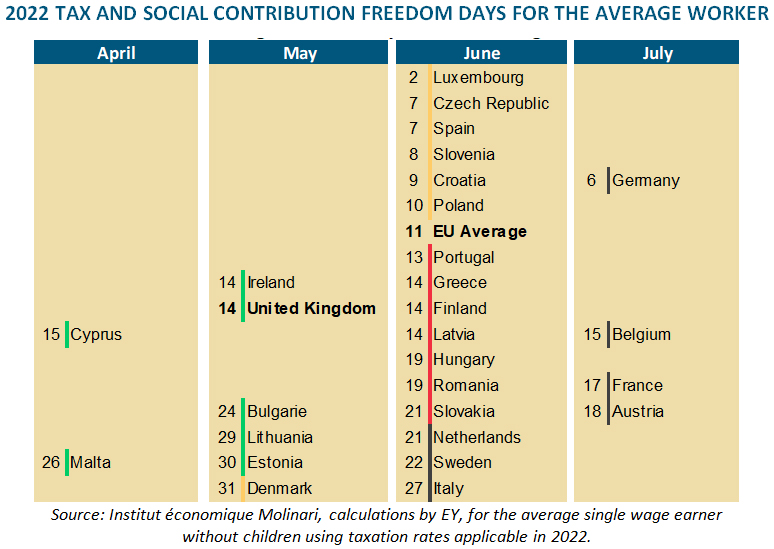 WHAT THE 2022 NUMBERS TELL US ABOUT EUROPE

Before achieving €100 of real purchasing power, the average employee faces €115 in  taxes and social contributions in Belgium, €118 in France and €119 in Austria. For comparison, the EU average stands at €83.

In light of current upheavals and soaring prices, particularly those linked to the COVID-19 pandemic and the war in Ukraine (fuel, food, etc.), workers in these countries have much less room to manoeuvre and are handicapped by the scale of their taxes and social contributions.

France comes in second by a nose with a Tax Freedom Day of July 17th, two days earlier than in 2021. The total tax burden on the average worker is 54.1%, down 0.5% from last year due to a drop in the average wage causing a more than proportional reduction in income tax.

Belgium is third on the podium, achieving their fiscal liberation on July 15th, one day earlier than in 2021. The tax rate on the average employee there is 53.5%, also down 0.5% from last year due to a small drop in the average wage.

Germany comes in fourth, winning its tax freedom on July 6th with 51% taxation on the average employee. Together with Austria, France, and Belgium, it is one of only four EU countries with a total tax burden on the average worker of more than 50%.

Italy’s Tax Freedom Day of June 27th puts it fifth and knocks it out of the club of countries over 50% taxation, though it was a member in “good” standing from 2016 to 2021. Taxes and contributions for the average employee there now total 48.6%, with income tax rates having been reduced in the 2022 Finance Law, resulting in a gain of ten days of social fiscal freedom. 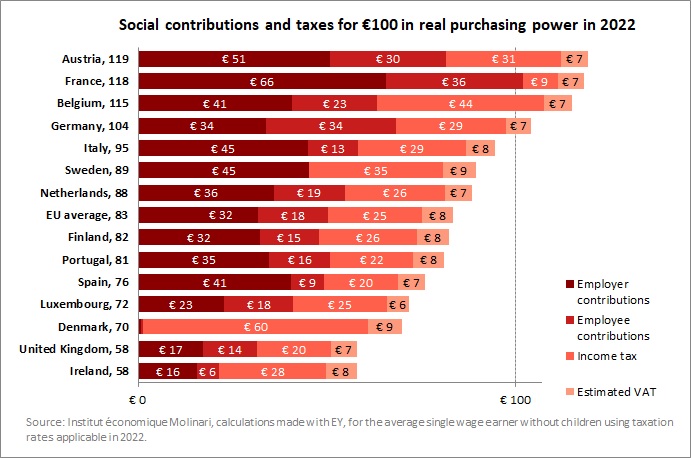 In the European Union as a whole, the pressure on average wage earners fell very slightly reaching Tax Freedom Day on June 11th, 2022, a whole day earlier than in 2021. This small decrease is linked to tax cuts in some countries (Italy, Hungary, Ireland) and, in others, stagnating wages that have led to more than proportional decreases in income tax.

Over the last year, sixteen EU countries have recorded a decrease in compulsory levies.. In 14 countries, this reduction allows recovery of at least one day of tax freedom: Austria, Belgium, Estonia, Finland and Sweden (+1 day); Spain, France, Luxembourg, Poland and the Czech Republic (+2 days); Slovenia (+4 days); Hungary and Ireland (+6 days); and Italy (+10 days).

Eight countries in the EU-27 are experiencing year-over-year increases in compulsory levies. These include Cyprus, Denmark and the Netherlands (-1 day of tax freedom), Lithuania and Portugal (-2 days), Germany, Croatia and Malta (-3 days). Three countries have seen no change (Bulgaria, Slovakia and Romania).

Higher taxes do not mean better quality of life

“Despite adjustments to social security contributions and income tax in recent years, the average French worker remains among the most taxed in Europe, along with the Austrians and, to a lesser extent, the Belgians.

“Over time, average French workers have become the leaders in compulsory contributions, resulting in limitations on their purchasing power.

“It is an illusion to think that companies can achieve structural correction of this situation by increasing wages. Taxes and contributions account for 54% of gross pay, and when an employer pays an extra €100 to an employee, the latter receives only €46 once compulsory contributions have been paid.

“In order to restore employees’ purchasing power, we must find the courage to face these structural issues with systemic reforms that boost net wages.

“Taxes that penalise job creation and wage growth must be reduced further. A significant proportion of taxes on production, which are abnormally high in France, are passed on to employees in the form of less generous wage increases. These taxes are detrimental to both wealth creation and purchasing power, and represent societal errors. Despite the announcement of further reductions, they remain around 30 billion too high with respect to the European average.

“In terms of expenditures, we must diversify the financing of pensions, which in France is based almost exclusively on compulsory levies detrimental to competitiveness and employment. In our neighbouring countries, a significant portion of pensions is financed by collective capitalization. This makes pension funding less costly for the economy, increases the value for money for both working people and pensioners, all while reducing wealth inequalities with an even wider sharing of the value.”

« Faced with price increases due to the upheavals of the COVID-19 pandemic and the war in Ukraine, the average French wage earner has less room to manoeuvre due to high levels of taxation.

“To make matters worse, and contrary to popular belief, high social contributions and taxes are not an indicator of better public services.

“Our health insurance spending, which absorbs 20% of all public spending, is poorly allocated. Despite significant health spending, the French suffered a multitude of shortages at the start of the COVID-19 pandemic and the situation with respect to the health system continues to deteriorate.

“Our education spending, which absorbs 9% of public expenditures, also suffers from poor value for money. France’s position is deteriorating, despite major collective investment. If France were to emulate the countries that optimise the balance between education spending and the labour market, it could save up to €43 billion per year.

“To spend money wisely, one must have to have the courage to verify the value achieved for price. But we have lost the habit of taking this common-sense approach and of correcting course when the value for money in collective services is inadequate.”

English (Extended version including South Africa, Brazil, Canada, the US, Japan, and the UK) at: https://www.institutmolinari.org/wp-content/uploads/2022/07/tax_burden_on_global_workers2022.pdf

Four Datawrapper infographics are available, one map and three tables:

The particularity of this indicator of economic freedom is that it puts the situation of average EU wage earners in tangible form by bringing together each country’s taxation of labour (social contributions and income tax) and of consumption (VAT). Calculations of employer and employee social contributions and of income taxes are done by EY for each of the 28 EU countries.

The study was written by Nicolas Marques, Cécile Philippe and James Rogers of the Institut économique Molinari (IEM).