Paris, April 2, 2021: The Zero Covid strategy is by far the most effective way to fight the current pandemic. In an original analysis released today, the Institut économique Molinari compares the G10 countries to three OECD countries that have implemented an elimination strategy (Australia and New Zealand) or something similar (South Korea).

THE REPORT SHOWS FRANCE TO BE MORE AFFECTED 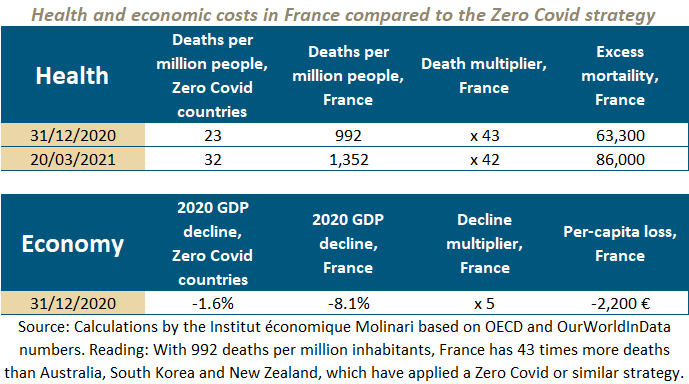 ZERO COVID: MOBILITY THAT STANDS UP BETTER OVER TIME

Cross-referencing of quarterly economic and health data confirms the superiority of the elimination strategy in terms of anticipation. People in those countries benefit from a level of visibility enabling them to project their societies and economies into the future.

In contrast, the course taken by the G10 countries has produced fluctuations, with the epidemic rebounding in the fourth quarter of 2020 everywhere except Japan, which is moving closer to Zero Covid. The mitigation strategy is causing them to seesaw, making it difficult to project into the future and thereby penalising societies and economies. This is especially problematic for businesses that depend on significant social interaction, which have been closed for months, as representatives of the hotel, restaurant, culture and recreation sectors have stated repeatedly.

In February 2021, Google searches for the word “Restaurant” were 64% lower than in February 2019. This decline was five times greater than in the Zero Covid countries, where restaurants are open and searches are down only 13% from February 2019. 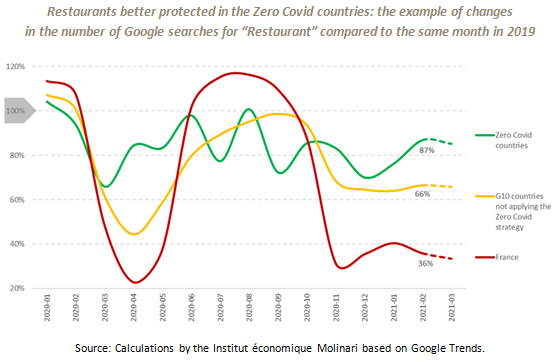 Participation in economic and social life is a function of people’s confidence in being able to take part without running the risk of falling ill, contaminating others or seeing health services overwhelmed.

It is not only government-imposed restrictions that reduce movement. Voluntary decisions by individuals to cut back on social life in the face of a fast-spreading virus also play a key role. The Swedish example shows the importance of this phenomenon since, even without a lockdown, the decline in mobility was significant. This explains why Sweden’s economic contraction was close to the levels observed in Scandinavian countries that went into formal lockdown. Where the elimination strategy is implemented, the end of the tunnel becomes predictable, and it is then possible to make reliable long-term plans, resulting in stronger economic performance and lower mortality.

Cécile Philippe, President, Institut économique Molinari, and co-author:
“Analysis of data on mortality, economic growth and mobility shows that health, economic and social interests are aligned.
“The countries that kept the spread of the virus to a minimum with a Zero Covid strategy have fared the best. They have recorded 42 times fewer deaths than in France, and their economies have not been hit as hard, with GDP falling five times less. Their initial lockdowns have proven to be a highly lucrative investment. For months, their people have not been hobbled nearly as much by restrictions on movement, whether voluntary or compulsory. These countries are in a position to implement gradual and well-organized vaccination campaigns. They are keeping their schools open without compromising the health of children or their families. They are holding back the number of people showing long-term symptoms (long Covid) and containing the spread of variants due to an absence of contamination.”

Nicolas Marques, Director, Institut économique Molinari, and co-author:
“The false dichotomy between health and economic interests has not helped in making the right public policy choices. Contrary to what has been said, health and economic issues are aligned in this pandemic.
“The pandemic has been especially deadly in North America, South America and Europe. Meanwhile, its impact has not been as great in Asia, Africa and Oceania, with far lower death rates and much better economic performance.
“Among rich countries, the discrepancies arise from different strategic choices. Most G10 countries chose a mitigation approach, failing to capitalise on the very significant effort made by their people during the lockdown in the second quarter of 2020. Australia, New Zealand and South Korea, joined by Japan, instead regarded lasting elimination of the virus as a key investment for their economies and societies. The data show that this Zero Covid strategy is a double winner in the long run, drastically reducing mortality while protecting economies far better.”

The report “The Zero Covid strategy protects people and economies more effectively” is available on IEM’s website : Download the study in English 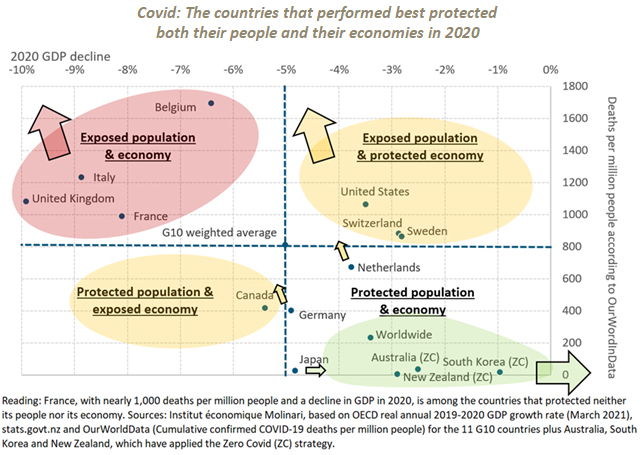 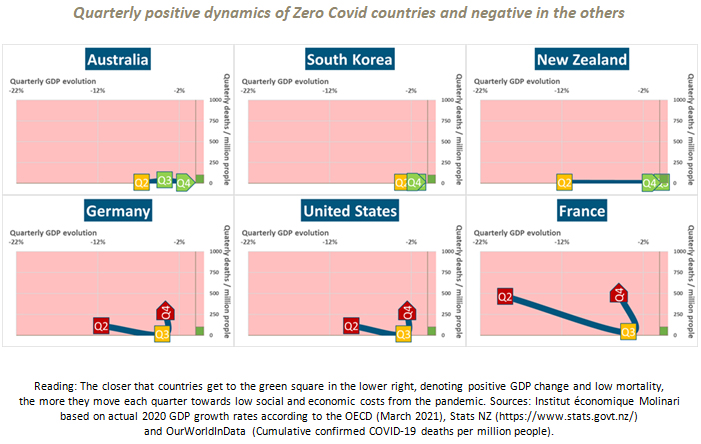 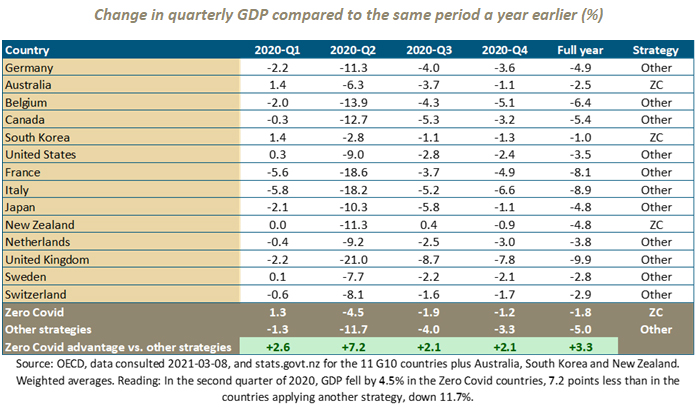 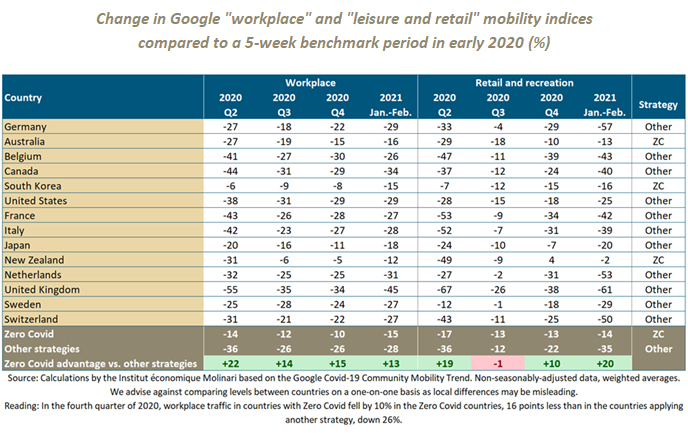 ABOUT THE AUTHORS AND THE IEM
The Institut économique Molinari (IEM) is a research and education organisation with the mission of promoting individual freedom and responsibility. The Institute aims to facilitate change by spurring debate around preconceived ideas that engender the status quo. It seeks to stimulate the emergence of new consensus positions by offering an economic analysis of public policy, demonstrating the value of dialogue and indicating the benefits of more lenient regulation and taxation. The IEM is a non-profit organisation financed by voluntary contributions from its members: individuals, foundations and businesses. Putting intellectual independence foremost, it accepts no public subsidies.