Paris, October 30, 2019 – The Institut économique Molinari is publishing, for the first time, a study on the taxes French consumers pay on a litre of petrol or a packet of cigarettes. This study quantifies the taxes embedded in the prices of these products, using a methodology that takes account of the various layers of taxes that enter into the final price.

These taxes, falling most heavily on a limited portion of the tax base, carry significant political risk, as shown by recent sociological work and the lessons that can be learned from the “yellow vest” episodes.

These indirect taxes, which target clearly defined population groups, are liable to stir greater opposition than would result from more widely spread taxation.

Compared to a standard product with 20% VAT (value-added tax), there are:

Calculations by the Institut économique Molinari show that:

Over all, the combination of excise duties and various VAT layers generates abnormal tax levels, ranging from 141% (diesel fuel) to 554% (cut-price cigarettes) of the pre-tax price.

This €60 billion accounted for 21% of the €284 billion in taxation on various goods and services, even though motor fuel and tobacco accounted for just 3.6% of household consumption.

This reflects a high concentration of taxation on specific products. This concentration is liable to generate reactions in public opinion, as shown in work by sociologists Isaac William Martin and Navad Gabay, who analysed 475 instances of tax revolts since the 1980s.

MUCH HIGHER TAXES THAN ON TRADITIONAL ECONOMIC PLAYERS

The IEM study provides an even broader analysis of taxation. Motor fuels and cigarettes are subject to specific taxation in addition to regular taxes. There are significant additional costs involving payments to governments of oil-extracting countries. Further costs stem from French regulations, such as energy savings certificates and social charges on the revenues of tobacco distributors.

Together, all these forms of taxation and legal obligations related to fuel may amount to 197% to 230% of the pre-tax production price. As regards cigarettes, they may amount to between 535% and 642%.

The taxes on motor fuels and cigarettes are especially tricky for the general public to grasp, but also for specialists. At every stage, the prices of these products incorporate specific charges along with traditional taxation. The existence of excise duties is well known, though the cascade effect on the VAT is less often mentioned. And the impact of the taxes collected at the production and distribution stage is never quantified. Hence the interest in this unique study.

Nicolas Marques, General Manager of the Institut économique Molinari, co-author
“Fuel and cigarette taxes are like modern-day versions of the medieval salt tax. Diesel fuel is taxed at seven times the rate of a conventional product and 95 octane petrol at eight times the rate. Premium cigarettes are taxed 23 times as much as a conventional product and cut-price cigarettes 28 times as much. When you add the other forms of taxation, taxes account for 197% to 230% of the pre-tax prices paid by motorists and 535% to 642% of what smokers pay.
“Over the years, our petrol stations and tobacco outlets have become full-blown tax collection networks. The great majority of their gross receipts goes straight into the public treasury, and consumers have the impression they are enduring tough, never-ending austerity measures. In this context, it becomes easier to understand the extreme irritability of motorists and smokers with the tax increases on fuel or cigarettes.”

Cécile Philippe, President of the Institut économique Molinari and co-author
“Our public finances are hugely dependent on fuel and tobacco taxes. Excise duties and VAT brought in €60 billion in taxes in 2018, collected from consumers. That amounts to 21% of all taxes on goods and services, even though motor fuels and tobacco accounted for just 3.6% of household consumption. This extreme concentration of taxation on these specific products is not sustainable.
“Law-makers have got into the habit of covering new spending through tax increases. More than 400 amendments on the revenue side of the 2016 finance bill were pledged against tobacco. Despite record receipts, France’s public finances remain in the red, whereas at least 10 of our neighbours have budget balances or surpluses. This tax overkill cannot underpin a sustainable social and economic situation. It is high time to become collectively responsible.” 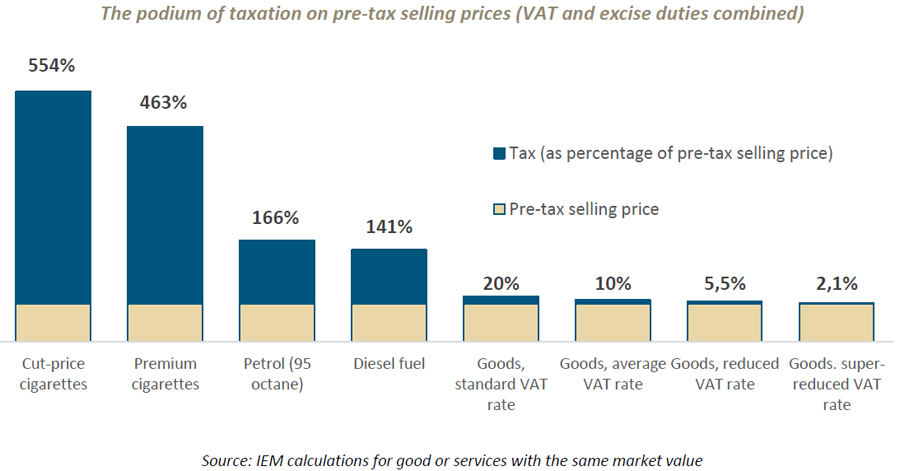 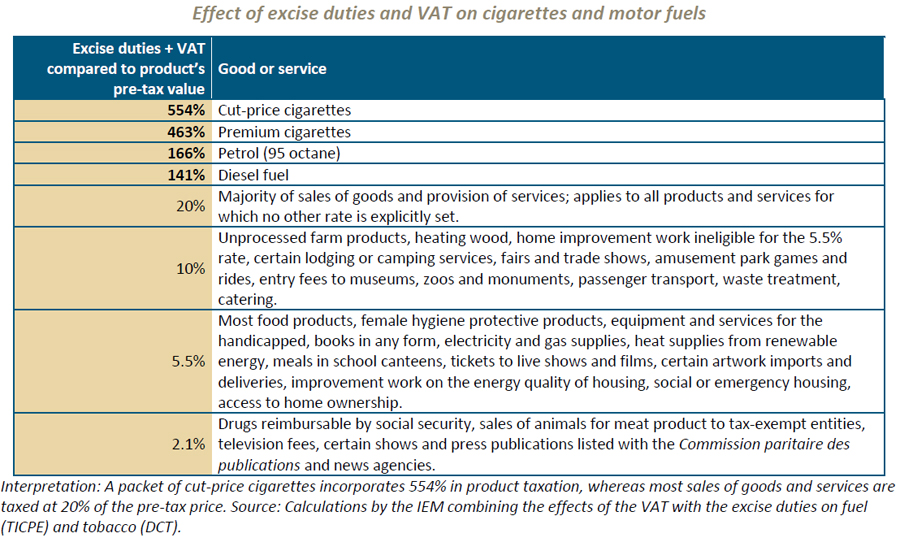 ABOUT THE INSTITUT ECONOMIQUE MOLINARI

The Institut économique Molinari (Paris-Brussels) is an independent research and education organization. It seeks to stimulate the economic approach in public policy analysis, offering innovative alternative solutions conducive to the prosperity of all individuals making up society.

THE STUDY IS AVAILABLE (IN FRENCH) HERE.