Paris, August 27, 2018 – The Institut économique Molinari has released a new study on the social and fiscal contribution of the CAC 40 companies. It presents a new way of quantifying the wealth created by these companies, outlining the sharing of this wealth between employees, governments and shareholders.

It shows that the CAC 40 companies created €338 billion in wealth for the French and global community in 2016. Employees are the greatest beneficiaries, with €240 billion in wealth, followed by French and foreign governments (€66 billion) and shareholders (€32 billion).

If we focus only on the share of earnings, governments appear to be the top beneficiaries with €41 billion, followed by non-government, non-employee shareholders (€32 billion) and then by employees (€5 billion). 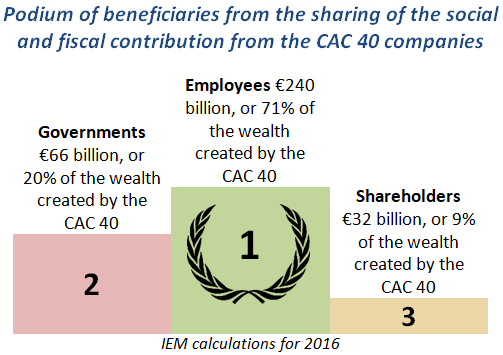 Employees are the top beneficiaries of this wealth creation, with €235 billion in staff expenditures (wages, bonuses, compulsory and optional social protection, etc.), €4 billion in employee savings and share ownership and €1 billion in dividends.

Among them, the French government has a particular interest in this. On the one hand, it gets revenues from taxes on production and on profits. In addition, it benefits from the various taxes on dividends distributed to physical persons and corporate entities that own the rest of the capital. Also, it receives earnings from dividend distributions as a reference shareholder (it owns 3.5% of the capital in the CAC 40 companies).

STATES ARE THE FIRST BENEFICIARIES OF THE SHARE OF EARNINGS

If we focus only on the share of earnings, governments appear to be the top beneficiaries, followed by non-government, non-employee shareholders and then by employees. 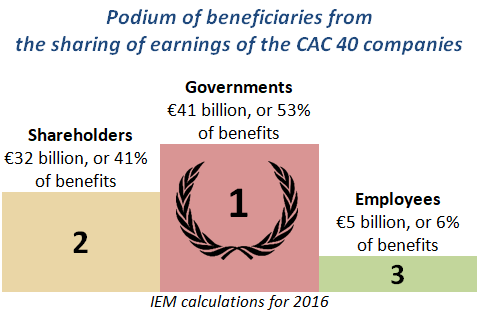 Shareholders are the second greatest beneficiaries from the sharing of earnings, with €32 billion in dividends after deduction of taxes and dividends paid to employees and governments.

Employees are the third greatest beneficiaries from the sharing of earnings, with €5 billion (€4 billion in group savings and share ownership and €1 billion in net dividends). With 3.5% of the capital, they get 6% of the benefits from the CAC 40 companies’ earnings and 90% of gains independent of earnings. 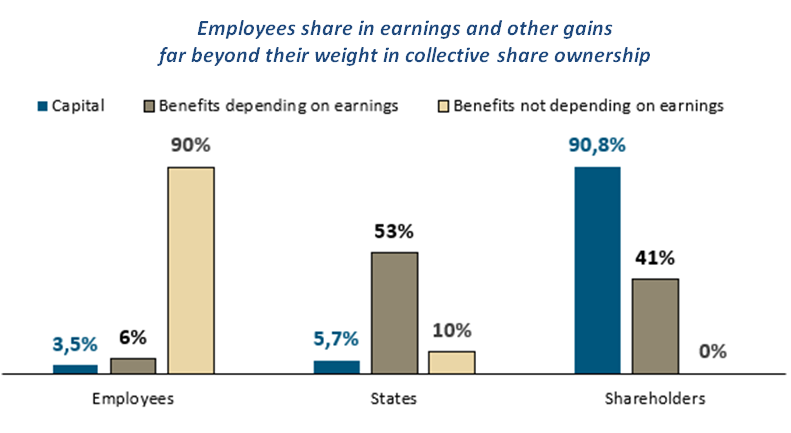 “The IEM study shows that businesses play a part in a collective wealth creation chain that benefits employees first and foremost, with €240 billion in 2016, then governments with €66 billion and finally shareholders with €32 billion.

“Focusing on profits alone is not sufficient to grasp the scope of companies’ social and fiscal contribution. The bias that sometimes leads to shareholders being presented as enemies of employees has the flaw of obscuring an inescapable reality: employees, governments and shareholders all have an interest in the development of companies and in their earnings.”

“These original numbers from the Institut économique Molinari show how the big companies benefit employees and governments above all and shareholders to a lesser extent.

“In 2016, they distributed seven times more wealth to employees than to shareholders and twice as much to governments as to the owners of capital. Even with a focus on profits alone, shareholders end up behind governments.

“These orders of magnitude should take the heat out of the debate on large companies and the sharing of their value creation.”

THE REPORT IS AVAILABLE IN:

FOR THOSE WHO WANT TO UNDERSTAND THE METHODLOGICAL DIFFERENCES

The IEM, aware that its numbers differ from other appraisals of magnitude, is also providing a methodology paper titled “Quelques biais à surmonter pour avoir un vrai débat sur l’entreprise” (Some biases to overcome for a true debate on business). This document identifies the pitfalls to be avoided so as to allow for a constructive debate on business. It is available here in French only.

As of mid-July, taxation and social contributions exacerbate the stress of reduced purchasing power in Belgium, France and Austria