He or she worked until July 27 to finance public spending. This is two days fewer than last year but 45 days more than the EU average.

The situation should improve significantly next year. The gap should narrow between France and the two other taxation leaders, Austria (nine days) and Belgium (ten days).

Paris, July 27, 2018 – With data calculated by EY, the Institut économique Molinari is publishing, for the ninth year in a row, its study on the actual tax and social burden faced by the average employee in the European Union (EU). This ranking has the distinct feature of showing the pressure actually endured by average employees for the current year, using a solid methodology applied uniformly throughout the EU and providing a good grasp of the true impact of taxes and charges and of the shifts that are occurring.

TAX AND SOCIAL FREEDOM DAYS IN 2018 FOR THE AVERAGE EMPLOYEE 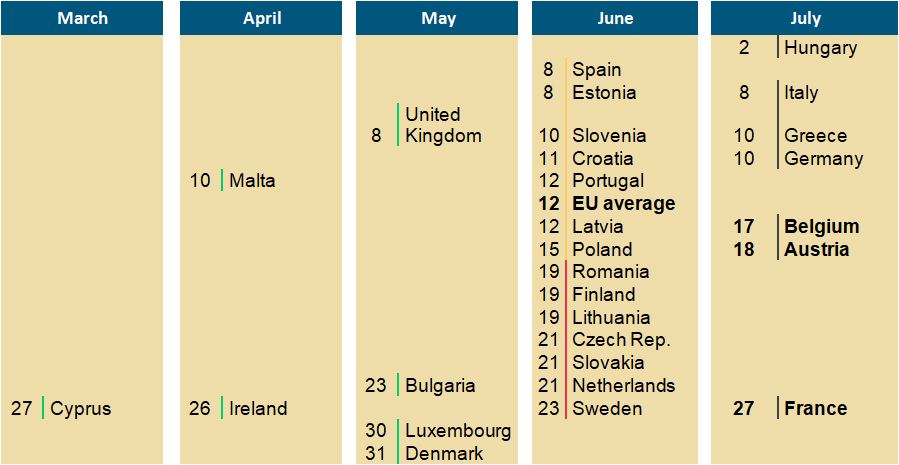 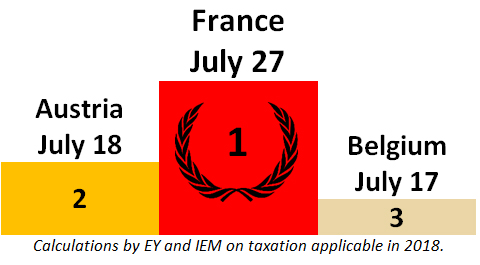 AMONG THE LEADING TRIO, FRANCE IS PULLING AWAY FROM AUSTRIA AND BELGIUM

As was the case last year, the three leaders in taxation of the average employee are Belgium, Austria and France, but the gap has widened between France and its two pursuers, with the order reversed.

Austria moves into second spot, with tax and social Freedom Day on July 18, the same as last year. From one year to the next, tax and social charge pressure has risen slightly, from 54.28% to 54.32%.

France remains the EU taxation champion for the third year in a row. Tax and social Freedom Day comes on July 27, two days earlier than last year. This shift reflects the drop in tax and social burden, from 57.41% to 56.73%, due to implementation of a portion of the reductions promised during the presidential campaign.

Before having €100 in actual purchasing power, the average employee has to face €131 in charges and taxes in France, €119 in Austria and €119 in Belgium. By way of comparison, the EU average is €84.

In six countries, more than half of work-related income is levied as taxes and charges: France, Austria, Belgium, Germany, Greece and Italy. The average employee has no direct control over more than 50% of the fruits of his or her labour, with influence over decision-making indirect at best. 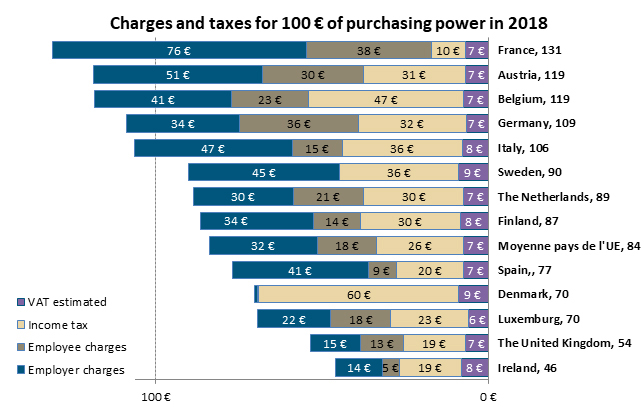 In the last year, 16 EU countries have been part of the decline in levies on the average employee, while 12 are seeing an increase.

CHARGES AND TAXES ARE FINALLY DECLINING IN FRANCE, BUT NOT AS QUICKLY AS ELSEWHERE

For the first time since the launch of this indicator, the average French employee is gaining purchasing power. His or her tax and social freedom day went from July 26 in 2010, to July 28 in 2014 and then to July 29 in 2016. The 2018 calculations finally show a reversal in trend, with tax and social charge freedom day on July 27.

Since the change of government, the reform of levies on wages has begun to take effect. It is enabling the average employee to recover €244 of purchasing power in 2018. This is only half the amount proclaimed during the presidential campaign.

Next year, the decline in social charges will lead to further improvement for the average employee, with a saving of about €400 in the course of 2019. But this is not enough on its own to alter France’s ranking. Even if it were in force for the whole year, France would have remained the taxation leader of the European Union this year.

Only the conversion of the CICE tax credit into a lasting decline in employer charges in 2019 will be sufficient to reduce the gap built up over the years between France and the two other taxation leaders, Austria and Belgium.

In theory, the average French employee is among the best paid, at €56,815, sixth highest in the EU, but is so heavily taxed (56.73% in charges and tax on the full salary, ranking first in the EU) that there remains only €24,582 in actual purchasing power, 11th in the EU.

While his or her employer faces labour costs similar to those in the northern EU countries, the average employee has purchasing power that falls between those of the northern and southern countries.

Even though the average French employee is better paid than a Swedish or Danish counterpart, he or she has 21% less purchasing power than the Swede and 33% less than the Dane.

MORE CHARGES AND TAXES DO NOT MEAN GREATER WELL-BEING

The study shows that French tax and social burden is not synonymous with living better.

Cross-referencing of works by the OECD (How’s Life?) shows that France, first in the EU in actual taxation rates of the average employee, is only:

– 11th in the EU in the latest issue of the OECD Better Life Index (out of 22 EU countries surveyed);
– 12th in life satisfaction;
– 12th in perceived health; and
– 17th in terms of unemployment.

Quality of life seems better in some countries with lower tax and social burden: this applies to countries with a Bismarckian social tradition (Germany, Austria, Netherlands, Belgium), the Beveridgian countries (United Kingdom, Ireland) and the Nordic countries (Sweden, Finland, Denmark).

“Taxation of the average employee is finally coming down in France, and this is excellent news.

“Since the launch of this indicator by the IEM, tax and social Freedom Day has kept moving later, from July 26, 2010, to July 29, 2017. France has become the country that taxes average employees most heavily, without the indicators showing that the French get anything extra in terms of well-being.

“For the first time since 2010, average employees are recovering two days of additional purchasing power. The lowering of social charges implemented by the new French government is a step in the right direction, even though its extent up to now falls short of campaign promises and of the declines in charges and taxes observed in Belgium and Austria in the last few years.

“In the medium term, the issue in France remains an emphasis on declines in charges and taxes. This requires an overhaul of the scope of public action and, contrary to fashionable ideas, a break from the movement for greater government control of social protection. Experience shows that, when it comes to social protection, centralisation is hardly a panacea, far from it.”

Nicolas Marques, director at the Institut économique Molinari and co-author

“In the last few years, we have spent far too much time on non-strategic topics. We have engaged in extensive debate on the ideal shape of pay slips or on collection of taxes at source, forgetting the societal issue of lowering charges and taxes.

“As a result, growth is lower in France than in the rest of the European Union. Unemployment remains abnormally high and is falling less than anywhere else. Our public deficits are not declining significantly, and debt is soaring.

“The year 2018 finally marks a break, with the start of a lowering of taxation in France. Let us hope that this movement will gather strength in the coming years.”

“Despite the good news, French and Belgian employees are still spending more than half the amounts distributed by their employers on charges and taxes.

“It is well worth asking why they are not receiving in return the best schools, the best health care or the most generous retirements and why they are not leaders in indicators of human development or well-being.”

Tax and social charge freedom day is the date when the average employee theoretically stops paying charges and taxes and can choose how to spend the fruits of his or her labour.

A distinct feature of this economic freedom indicator is the way it gives solid form to the situation of the average employee in the EU, including taxation on work (social charges and income tax) and on consumption (VAT) in each country. Calculations of employer and employee social charges and of income taxes are conducted by EY for the 28 EU countries.

The study is written by Nicolas Marques, Cécile Philippe and James Rogers of the Institut économique Molinari (IEM).

The Institut économique Molinari (Paris-Brussels) is an independent research and education organisation that seeks to stimulate the economic approach in analysing public policy, proposing alternative and innovative solutions conducive to the prosperity of all individuals in society.

Despite reforms, French competitiveness is still 7% lower for wages net of taxes and 35% lower for corporate profitability.