Paris, November 8, 2016 – Using Eurostat data, the Institut économique Molinari has calculated the date when European Union (EU) governments have spent all of their annual revenues.

The 2nd annual edition of this study shows that:

– France’s central administration has spent its resources in their entirety as of November 9, or 53 days before year’s end. This situation is not improving from one year to the next.

– On average, the EU’s central governments exhaust their resources on November 30, or 31 days before year’s end. This is six days later than the year before, marking a significant improvement.
The gap between France and the EU is widening. It is now 22 days, compared to 16 days the year before.

– France’s central administration, with 53 days of unfinanced spending, is among the three EU countries with the greatest imbalances, together with Greece (64 days) and Portugal (54 days). 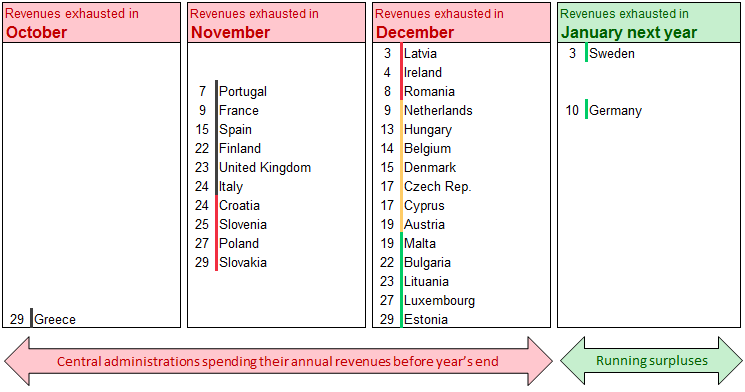 Among the EU’s 28 central administrations, two were running surpluses last year, namely Germany, with a surplus equal to 10 days’ spending, and Sweden, with a surplus of three days’ spending. Their revenues for the year enabled them to finance all of the year’s spending and to lower their debt.

The other 26 central administrations spent their entire revenues before the end of the year.

The EU’s central administrations as a whole exhaust their resources on November 30, or 31 days before year’s end. This is six days later than in the study’s previous edition.

The position of the French central administration remains dismal

In every fiscal year since 1980, France has been out of balance. Beyond the shocks resulting from jolts to the economy, the situation has deteriorated. On average, the date when all resources are spent has advanced by 1.5 days annually since 1980.

Compared to the rest of the EU, France’s situation has gone downhill. The government and its various central bodies are systematically near the bottom of the ranking. They have been 21st on average over the last 20 years and 26th out of 28 last year.

Even in recent times, marked by a significant rise in compulsory levies, the situation has not improved compared to the other EU countries. In 2015, the gap between France and the EU average continued to widen. France’s central administration had spent all its resources 53 days before year’s end – 22 days earlier than the rest of the European Union. This is the widest gap in 15 years.

This also applied to the social security administrations, which spent their revenues three days before year’s end. Despite an assortment of reforms limiting growth in health care spending and tightening the operation of pay-as-you-go pension plans, the books are still in the red and have not yet returned to the average deficit of the last 20 years, with budgets spent two days before year’s end on average.

On the other hand, the situation of local administrations has improved over the long term. Whereas over the last 20 years they had spent their budget three days before year’s end, last year they were in surplus by one day.

A lasting imbalance despite a significant increase in public revenues

The study shows that the persistence of public deficits is not due to a decline in public revenues. In relation to GDP, public revenues have been rising substantially in France for decades. They rose from 43.2% of GDP in 1978 to 53.5% in 2015, representing an increase of 10.3 points.

During the latest period, France has performed atypically compared to the rest of the EU. Since 2013, French public spending has continued to grow, whereas it is falling in the EU. In 2015, French public spending accounted for 57% of GDP, or 0.2% more than in 2009, the previous record year. The situation has been different in the EU, with spending down by 2.8 points compared to 2009.

Quote from Cécile Philippe, director of the Institut économique Molinari (IEM) and co-author

“In France, the government is living on credit 53 days a year. This is far more than in nearly all other European Union countries. Only the Greeks and the Portuguese are doing worse, with 64 days and 54 days respectively financed on credit.

“The situation is not improving significantly from one year to the next, in contrast to what is being observed in the rest of the EU.

“The adjustment variable cannot lie in a perpetual increase in debt. Experience shows that long-lasting debt development is a source of risks for taxpayers and future generations as well as for holders of public debt.”

“France is characterised by an overlap of taxation worthy of the most heavily socialised northern countries and of deficits typical of crisis-ridden southern countries.

“We are living in a total paradox. We have reached a level of unmatched tax pressure, limiting the chances of a sustainable recovery and of a significant reduction in unemployment. At the same time, we are seeing the persistence of substantial deficits year after year.”

The study titled “The date when European Union governments have spent all their annual revenues” is available (in French only) on our website.

The Institut économique Molinari (IEM) is a research and educational organisation that seeks to undertake and stimulate the economic approach in analysing public policy. It has set itself the mission of proposing alternative and innovative solutions conducive to the prosperity of all individuals in society.

(Paris or Brussels, in French or English)

Despite reforms, French competitiveness is still 7% lower for wages net of taxes and 35% lower for corporate profitability.