The survey’s 5th edition shows that:

• French employees will be released from their social security and tax contributions as of July 28th 2014, i.e. two days later than last year.

• France is one of two countries that tax employees at the highest rate, just behind Belgium. 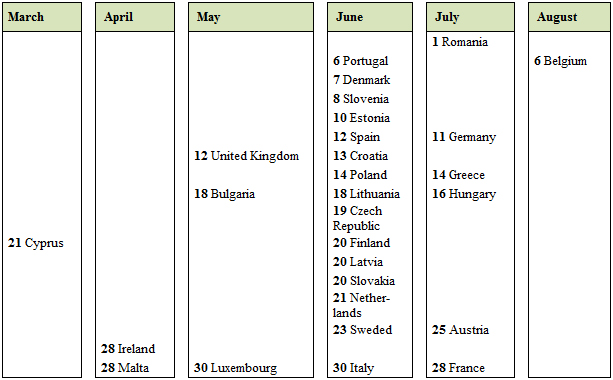 The average tax levy on employees continues to grow as a result of fiscal austerity policies.

This average conceals different trends across different countries. 15 EU countries have contributed to the tax burden’s increase, while 9 others pulled the figure down.

While some governments have continued their policy of higher social security costs and taxes, introduced in the wake of the 2008-2009 financial crisis, others are moving in the opposite direction.

French employees, virtually the most heavily taxed in the whole European Union

Just like last year, the most voracious tax collectors are Belgium and France. The tax burden in those countries will stand at 59.60% and 57.17%, with tax liberation days on August 6th and July 28th 2014. They are followed by Austria, Hungary, Greece and Germany, with tax burdens ranging from 56.20% to 52.38% and tax liberation days between 11th and 25th July.

The sheer scale of these levies helps explain the tensions between French bosses and employees. The former look at the total payroll, including mandatory employers’ contributions to be paid on top of gross wages, while the latter worry about their take-home income. Employers thus legitimately claim that they spend a lot on their employees, while these often feel that their contribution is not adequately recognized.

The disconnect between level of taxation and quality of public services

Many studies, in fact, show that France obtains mediocre scores on a variety of global indicators, despite its high levels of taxes and public spending.

This is true of competitiveness-oriented surveys:

• Ranking countries according to the ease of doing business there, the World Bank has placed France in 38th position out of 189 countries (down 4 places relative to the previous edition). Within the EU, it had assigned France the 15th position out of 28 (down 1 place).

• The World Economic Forum, meanwhile, ranks France 23rd out of 148 countries (down 2 spots). Within the EU, it puts France in 10th position out of 27 (down by one place).

Indicators that focus on quality of service or quality of life reveal a similar picture:

• The United Nations ranks France 20th out of 177 countries in its Human Development Index report. At 8th place, France’s standing within the EU is not on a par with its public spending. Indeed, nations with a lower tax burden than France got similar HDI scores (Austria, Finland, Slovenia, Denmark) or significantly higher scores (Germany, Sweden, Netherlands).

• A comparison with OECD nations tells a similar story. The latest edition of Better Life also reports less-than-impressive performance by France. Based on an average of the various criteria it uses, the OECD places France 18th out of 36 countries surveyed. EU-wide, France ranks 11th, and is outperformed by several countries with lower taxes (Ireland, United Kingdom, Luxembourg, Denmark, Finland, Netherlands, Sweden, Germany or Austria).

All this suggests that France’s high labour costs and tax pressure cannot be explained by better-than-average services and, instead, that its public and social benefits are anything but “cheap”.

“France’s situation is very worrying. Despite calls for a tax freeze, the tax pressure has been constantly growing. In 2014, the tax burden on the average French worker has increased significantly, in contrast to what happened in Italy, the Netherlands, Belgium, Germany and the United Kingdom.

And despite a tax grab the like of which we had not seen since 2010, public accounts still record a deficit and government debt is sky-rocketing. Once virtuous France has joined the club of Europe’s most indebted countries.

Incapable of reforming itself, France is seen as the EU’s sick child, hence its declining influence compared with its neighbors, who have been able to rethink their policies and lower their public spending” says Cécile Philippe.

This study was prepared by Nicolas Marques, Cécile Philippe and James Rogers of Institut économique Molinari (Paris, Brussels) based on published Eurostat and OECD data. Payroll tax calculations were made by Ernst & Young Belgium.

The report is available in French at: https://www.institutmolinari.org/fardeau-social-et-fiscal-de-l,1906.html

The English version is available at: http://newdirectionfoundation.org/content/2014-tax-liberation-calendar-2014-steuerzahlertagkalendar

The Institut économique Molinari (IEM) is an independent, non-profit research and educational organization. Its mission is to promote an economic approach to the study of public policy issues by offering innovative solutions that foster prosperity for all.

(Paris, in French or English)

As of mid-July, taxation and social contributions exacerbate the stress of reduced purchasing power in Belgium, France and Austria